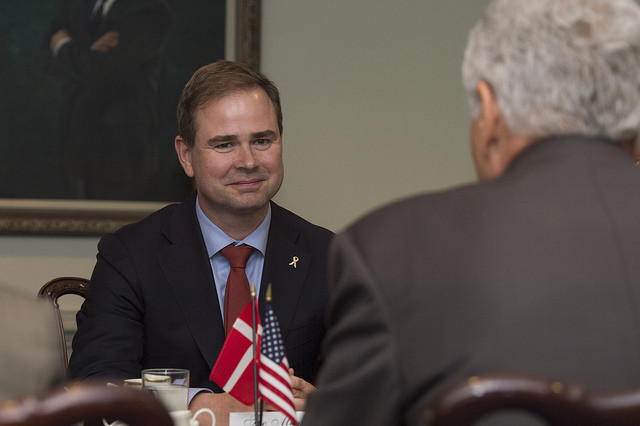 Every decision a politician makes represents danger to his or her career. In a recent project to upgrade the Danish army’s equipment, Nicolai Wammen, Denmark’s Defense ministry, has come under intense fire for its odd and shady choice. And yet, mainstream media haven’t addressed the mystery, despite there being a good story here. Is media silence on the matter bought with subsidization?

“Total amateurism” and “scandal of unseen dimension”, summed up (1) Troels Lund Poulsen, spokesman on Defense from the Liberals party. After brewing the deal for months, Denmark made its final decision (2) on which armored personnel carrier it would choose to replace its old fleet of Bradley M113. And on April 30th, 2015, the Piranha 5 from GDLS was chosen. Almost instantly, doubts were cast on the decision to resort to that specific vehicle. The response to those doubts also appeared suspicious, as both the government and the media went silent on the matter, as if they didn’t want it to get any attention.

The Danish Defense blog, Nytkampfly, an alternative yet reliable source, voiced its assessment on the deal (3). While it praised the choice of wheeled vehicles over tracked ones (3 of the 5 contenders were tracked), for its speed and flexibility, it was surprised at the choice of GDLS’s product, as it bluntly contradicted a Defense purchasing policy which is in place in Denmark, as it is in many other countries. Most Western or NATO-aligned countries choose to purchase off-the-shelf products which are already fielded in allied armies. The advantages yielded by this policy are many : soldiers and operators will know, from allied experience, what the vehicle is worth in real conditions; the cost of purchasing the equipment is much lower (as the manufacturer is selling large volumes), and operational maintenance is far easier, as troops on the battlefield can supply each other with parts and mechanics. Without this policy, armies would play Russian roulette every time they buy new equipment, and find out at their expense if the piece of kit has been properly designed or not; as well as make their maintenance and operational costs soar.

The NH-90 was sidetracked from the shipborne helicopter replacement project, in keeping with this policy. Too few allied or NATO countries used the helicopter and it was judged too likely that operational and maintenance problems could occur, or that expenses could quickly bloat.

This discrepancy was therefore noted by some defense experts, who sought clarifications on the deal. The government gave none and the mainstream media gave none. And that type of freezing-up will alert any dogged journalist, whether in a news agency or on a specialized blog: they know how to pick up on fishy details.

The reason for the blackout came out a few weeks later: the deal had been poorly designed (4), as the financial chapter securing had been overlooked. The purchasing contract was concluded in Swiss francs, a currency which has suffered substantial instability lately, and the Danish government hadn’t deemed necessary –or simply forgot!- to sign an exchange rate coverage contract. As a result, within a week, the cost of replacing the vehicles had already jumped by 16% (ie USD 50 million, on a contract worth over USD 450 million (5)) with no guarantees on where it could go. Given the Danish ambitions to boost their participation to allied operations and their diplomacy, such a blunder could lead to hindering Danish Defense capabilities.

The next chapter of the saga lies in media silence. Given that the Greenland (a Danish territory) Prime Minister Aleqa Hammond (6) had to resign over the misuse of a mere 18 000 dollars, one can only imagine the echo such a large (and avoidable) expense would have instantly hit headlines. And yet, nothing. Not a word from large newspaper and news agencies.

For the Nytkampfly blog, the reason is obvious: public subsidies (7), which can reach USD 3 million, and allow the government to keep a grip on media. The link between governments and media is under close scrutiny in Western countries. Governments gladly hand out subsidies, in the form of “support for media liberty of expression”. But if those budgets can be allocated, they can also be suppressed and therefore represent a lever on the press.

Perhaps the Danish government is simply stalling for time. Now that the flawed contract has become apparent to all, it isn’t impossible that Defense Minister Nicolai Wammen is sandbagging in order to give time to his teams to find ways to pull out of the deal or re-start the project. It would, after all, be the logical way to recoup the millions of dollars of public money lost. If that is the case, the next round will be rough: GDLS has shown pretty aggressive business ways in past deals. In the deals of the Santa Barbara Ascod 2, in the British FRES-SV (8) for example, GDLS tried to back out of signed clauses
20 years ago, the scandal would have flown under radar. Mainstream media, with their television reports and paper print, would have drowned out any critics of the deal. But in the day and age of instant information on the web, a simple blog will get as much traction and magnitude as a large news agency. A shift in information management which should bring far more transparency into political decisions.