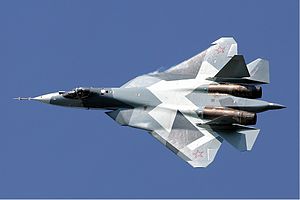 Russia and India dominated the sky for almost a decade with Sukhoi 30 MKI  (Modernizirovannyi Kommercheskiy Indiski / Modernized Commercial India), but the dominance was soon taken over by a new 5th generation aircraft from America. The plane can penetrate the enemy skies without being detected. This new stealth feature in the plane makes it a dominating aircraft.

To regain the air supremacy, Russia is soon going to induct its own 5th generation stealth aircraft PAK FA (Read: Russia to rule the sky once again). The development had begun long ago, in the late 1980s, when the Soviet Union outlined a need for a next-generation aircraft to replace its MiG-29 and Su-27 in front line service. PAK FA would be a single seater combat aircraft, whereas with the help of India, Russia will be making a twin seater variant too, which will use Indian origin weapons and avionics. HAL (Hindustan Aeronautics Limited) chairman told on 16th September, 2008 that the contribution of India will be mostly in composites, cockpits, avionics and arming the fighter.

American F-22 is already serving the US Airforce, while Russian plane is still to be inducted. Now that both the planes are out of the paper into the real existence,  we got many requests to do a comparative research and analysis on the specification and performance of these two planes.

In 1981, the U.S. Air Force developed a requirement for an Advanced Tactical Fighter (ATF), as a new air superiority fighter, to replace the F-15 Eagle and F-16 Fighting Falcon. This was influenced by the emerging worldwide threats, including development and proliferation of Soviet Su-27 “Flanker”- and MiG-29 “Fulcrum-class fighter aircraft.

While US itself is having problems in keeping and maintaining F-22 in the airforce that they had to stop further orders, it is not clear to what extent Russia and India will be able to carry this costly fighter.

US has ruled out any selling plans for F-22, instead it will consider selling only F-35 to friendly nations. PAK FA and FGFA (Indo Russian Fifth Gen Figther Aircraft) will be only used by India and Russia, though recently South Korea has shown interest in purchasing this aircraft from Russia.

Stealth technology is acquired by incorporating a combination of features to reduce visibility in the infrared, visual, audio and radio frequency spectrum. It is accomplished by using a different concept design than the conventional design which, though arises some limitations to it, gives it an advantage of intruding a hostile region without the knowledge of the enemy.

Russian approach towards stealth is slightly different; the plan is to make the aircraft invisible to radar by using a sort of plasma torch on the nose of the plane, and this torch creates ionized cloud around the plane which will absorb radar waves. (Read more: Russia to rule the sky once again).

The unit cost of Russian Aircraft is slightly more than the F-22, but Russians planes are considered to be more agile and better aerodynamically designed.

According to the interview of the Sukhoi officers, the new radar used in the PAK FA will reduce the pilot load and will use dedicated data links to share information between aircrafts.

On the other hand, the high cost of the F-22 aircraft, a lack of clear air-to-air combat missions because of delays in the Russian and Chinese fifth-generation fighter programs, a US ban on Raptor exports, and the ongoing development of the planned cheaper and more versatile F-35 resulted in calls to end F-22 production. In April 2009 the US Department of Defense proposed to cease placing new orders, subject to Congressional approval, for a final procurement tally of 187 Raptors. The National Defense Authorization Act for Fiscal Year 2010 lacked funding for further F-22 production. US is now giving more stress on completing the development and production of much cheaper and better F-35.

There has been reportedly 3 accidents of F-22, latest one was On 16 November 2010, where an F-22, based at Elmendorf, Alaska, lost contact with Air Traffic Control. The accident has been attributed to a malfunction in the bleed air system that shut down the aircraft’s Environmental Control System (ECS) and On-Board Oxygen Generating System (OBOGS).

On 11 January, 2011 Chinese had tested their own J-10 stealth fighter, leading to the speculation of the reactivation of F-22 production. As we have come so far, and US has had not so good hands on experience of having a stealth fighter in the force, it wouldn’t be fair to compare F-22 with PAK FA. The next comparison should be between F-35, PAK FA/HAL FGFA and Chinese J-10.