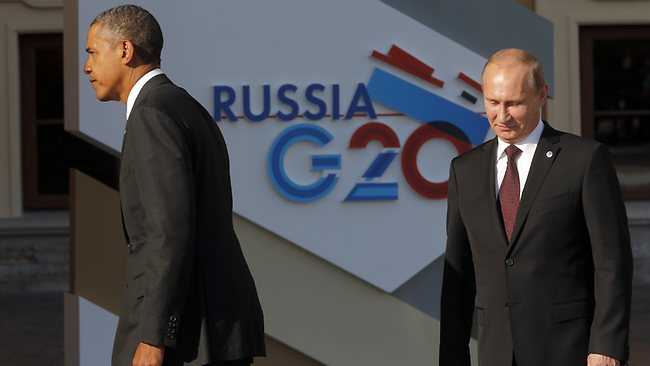 In St. Petersburg at the G-20 Summit, India has finally declared its policy on Syria. Many forums and discussion boards were making guesses about India’s inclination in the whole Syria Issue. There was also a feeling that India might stay uninvolved in the whole issue until today. Indian Prime Minister has expressed his support to Russia and called for global community to operate under the framework of the United Nations.

At G20 summit, with the support of India, the opponents of US military strike on Syria outnumbers the supporters of the strike within the group. Russian President, Vladimir Putin said he was surprised seeing the large number of support coming to him in the form of India, Brazil, the South African Republic, and Indonesia.

India did not say much on Arab spring, India also abstained itself from commenting much on war on Libya. India lost opportunity to come forward with its word, project its power, and play a role as a regional power. Many analysts inside India believe that India is confused with its foreign policy. The way it deals with China and Pakistan in the region adds to the criticism of its weak diplomacy and its lack of interest to project itself as a global power.

However, India plays a very complex diplomatic game. During the cold war, analysts in US were aware of the Indian game plan and often described India as playing a matured political game, which no one expects from a newly independent country. Right after the independence, India decided to remain neutral without joining any of the bloc. India’s policy was its development, no matter from where it is coming. India was open to the help from US, UK and USSR. India enjoyed the contribution in education and industrial sector.

At the wake of 1971 war, then Indian Prime Minister Indira Gandhi knew that US would support Pakistan. She managed to bring Soviet Union on the table and signed Indo-Soviet treaty of peace, friendship and cooperation without formally joining the Soviet bloc. The result of which came out as the defeat of US supported Pakistan and independence of Bangladesh. (Continue Reading).

In case of Iran, India voiced its support for the gulf nation shocking United States and bringing it to the negotiation table. The US came up with Indo-US Civil nuclear deal. The White House urged Congress to remove certain amendments in the Hyde Act, which would deem deal killers by India. The result was India got waiver from NSG (Nuclear Supplier Group) without signing the NPT (Nuclear Non-Proliferation Treaty). In the Hyde Act, US added few clauses to have India align with its view over Iran.

Now, India has finally made its stance on Syria clear. We have to see for how long it keeps this stance when the world divides over Syria. For US, interacting and convincing G20 leaders was not a problem, as it hardly listens to the opposing countries. The real problem for Obama would be convincing US Congress for a military strike on Syria in the coming week.

Argentina has officially condemned the intents of the Western powers for a military strike on Syria saying that a military intervention could “aggravate” the Middle East country’s domestic scenario. The South American country refused to accept the use of chemical weapons and called for humanitarian intervention without the usage of military.

Mexico condemns the violence in Syria without blaming any of the sides. However, the country opposes any military strike and reiterates its support for the plan of Kofi Annan, Joint Special Envoy of the UN and the League of Arab States, to achieve a peaceful solution ending the violence.

Being sure that chemical weapons might have been used in Syria, Germany has cleared that it will not participate in the military strikes. “Our participation has not been requested, nor are we considering it,” German Foreign Minister Guido Westerwelle told the “Neue Osnabrücker” newspaper.

UPDATE on September 7, 2013 at 11:18 GMT: German Foreign Minister Guido Westerwelle has said he will join the G20 declaration calling for military action against the Syrian regime. “After we saw this excellent and very wise position of the European Union, the (German) Chancellor (Angela Merkel) and myself decided that we support now the G20 statement.”

US Allies Divided Over Syria

While France, Turkey, Canada, and the UK strongly supports US plans of attacking Syria. The UK, Canada and Turkey have refused to step in the conflict with their respective militaries.

Mr. Obama, after being left alone by his allies, might find it difficult to gather support of US congress next week. At the G20, while the common belief is that nothing solid could have been done, but it looks like that the opponents have the upper hand. UN reports and US congress decision is now an important factor. Now it looks unlikely that the US will strike Syria alone before the reports come out.

#JMBG Protests: Protesting for Basic Rights and Facilities to the New-Borns in Bosnia and Herzegovina