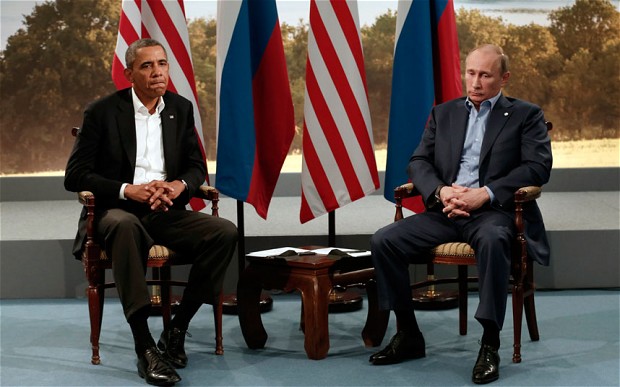 The US has announced a new list of sanctioned Russian officials and businesspersons today. The new list names some 20 names as published by the US Department of Treasury.

On March 17, the US had enforced biggest sanctions against Russia since the end of cold war. President Obama showed his protest against Russia’s support of Crimea’s vote to secede from Ukraine by freezing the US assets of seven Russian officials. Obama described the move as “increasing the cost” to Russia.

“We are imposing sanctions on specific individuals responsible for undermining the sovereignty, territorial integrity and government of Ukraine. We’re making it clear that there are consequences for their actions,” Obama said.

EU had already announced travel bans and assets freezing for 21 people involved in the unrest in Crimea.

Russian Railways president, Vladimir Yakunin who is one of the 20 officials named in the list said surprisingly, “A country which calls itself democratic could punish for an honest position and sincere comments.”

US has also declared that Bank Rossiya, which is used by several senior government officials of Russia, will be “frozen out of dollar.” Currently the bank holds around $10 billion in assets.

“We are puzzled to see any names on the list but even if there were none, lists like that are totally unacceptable to us,” presidential press secretary Dmitry Peskov said. “In any case, it won’t take Russia long to react.”

In a retaliatory response, Russian Foreign Ministry released a list of ten US citizens, which included House of Representatives Speaker John Boehner, Senator J. McCain. Both of them have expressed their feeling of proudness to fight for Crimea.

“In response to sanctions imposed by the US Administration on 17 March against a number of Russian officials and deputies of the Federal Assembly as a “punishment” for support of the referendum in Crimea, the Russian foreign Ministry announces the introduction of reciprocal sanctions against a similar number of US officials and lawmakers,” reads the statement published on the Foreign Ministry’s website.

“Treating our country in such way, as Washington could have already ascertained, is inappropriate and counterproductive,” the statement further said.

The EU and the US do not recognize the referendum and consider Russia’s accession of Crimea illegal. On March 16, over 96% of Crimeans voted to join Russia.

More Excerpts from the statement

“it looks like the American side continues to blindly believe in the effectiveness of such methods, taken from the arsenal of the past, and does not want to face the obvious: the people of Crimea, in a democratic way in full accordance with international law and UN regulations, voted to join Russia, which respects and accepts this choice. You may like this decision or not, but we are talking about a reality, which needs to be taken into consideration.”

Meanwhile India has unofficially made its stand clear: If Ukraine simply moves a resolution in UN stressing on respect for territorial integrity, India is likely to go with it. But if the resolution speaks of condemnation of Russia, then India will abstain from voting. IBN live broke this news citing certain “sources”. There is no official statement yet. Earlier on Tuesday Putin has called Indian Prime Minister Manmohan Singh thanking him for his support and explained him the situation in Ukraine and Crimea.

European Union: not thinking about tomorrow because I am afraid of today

Are We Not Spending Enough On Defence, Or Are We Spending It Wrong?

Russian by roots, global citizen by choice. In love with India and Indian culture, love to report everything from politics to military news. Against the controlled media.