Nomadic people that live across mainly 5 countries, Algeria, Libya, Mali, Niger and Burkina Faso, the Tuareg are also called the ‘blue men of the desert’. This has to do with the dark blue turbans that leave stains on their skins. Their number can be only estimated and it is allegedly close to 3 million with another 1 million exiles spread over many other countries.

Apart from a rich culture, tradition and history the Tuareg also provide us with a case study for unintended consequences of humanitarian intervention. More specifically, in this short piece of writing I will explore the results of the Libyan revolution and the Gadaffi regime-change in terms of Tuareg rebellion in Northern Mali. 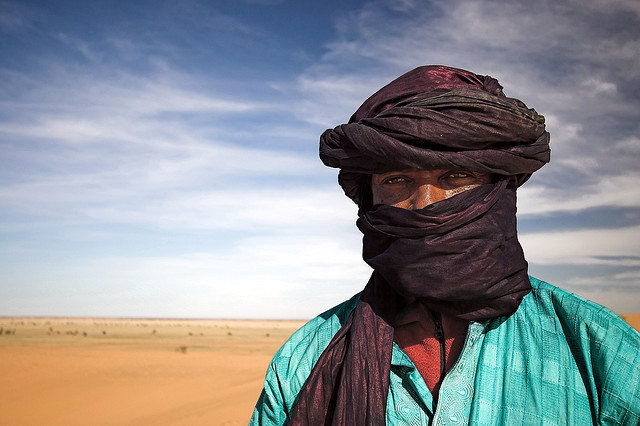 In February 2011 the Arab Revolution touched Libya where Colonel Gaddafi was fighting the rebels with large support of his Tuareg brave Saharan friends for whom during the 1970s and 1980s he set up training camps. It is fascinating to see how the Colonel himself has been symbolically perpetuating a romantic view of the nomadic lifestyle through his clothing and by hosting international leaders in his everywhere-travelling famous Bedouin tent.

Much could be said about the ideological motivations behind the Tuareg support in Libya. However, the material aspect should not be downplayed. It is reported that the promised payment for the fighting was of about $10.000 to join up and of $1000 for each day of risking the life. Most of the time this can be the only source of income for the families making a living in the dry desert. The energy deposits that could spur development in this region are not well managed and the northern areas where the Tuareg are located are often marginalised by the central authorities. 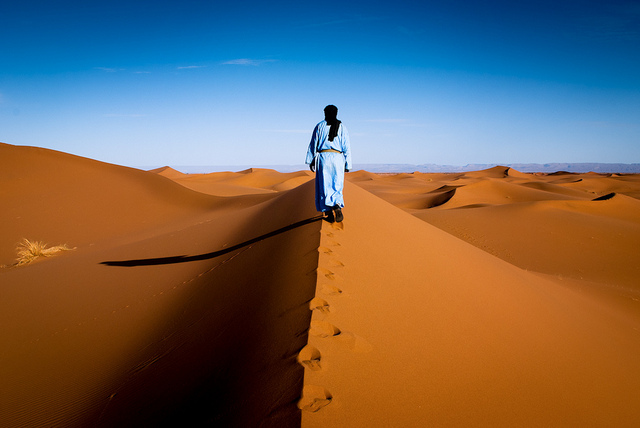 After Gadaffi had been overthrown with NATO support and executed by the angry mob, his former Malian Tuareg allies found themselves armed and ready to reclaim their ancestral land. The creation of a new rebel group called the National Movement for the Liberation of Azawad (MNLA) would also bring to life a competitor in the shape of an Islamist military rebel group, Ansar Dine which is aligned with Al-Qaeda. The MNLA rebellious attacks commenced in January 2012 with the aim of taking over Northern Mali. 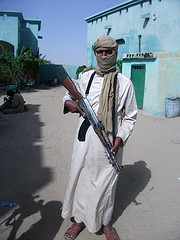 An internationally condemned coup d’etat followed due to military dissatisfaction with President Touré’s handling of the crisis and eventually with renewed offences the MNLA got control over the three main cities in the north, Kidal, Gao and Timbuktu. Nonetheless, Ansar Dine had some military success of its own which ended up in claims over the same territory.

By the summer of 2012, Mali was being torn between three centres of power: the military junta which turned authority over to Interim President Traoré, the secular nationalist movement of MNLA which had raised the flag of Azawad over Gao ( a declaration of independence rejected by the EU and the African Union) and the Salafist Al-Qaeda in the Islamic Maghreb (AQIM)/ Ansar Dine who hold Timbuktu. In June 2012, the Tuareg rebels were force to flee Northern Mali while the Islamists took over their conquered lands.

The course of events surely did not end here but for our analysis this time frame is more than enough. It enables us to draw several lessons from this unfortunate situation. First, it confirms that intervention in another sovereign country ought to be of last resort. Regime-change tends to be a dangerous foreign policy since the power vacuum created allows for chaos and competing destructive interest to tear apart the social and economic order of the place in question. Some would argue that transition assistance could safely take the process to conclusion, but I think this is as risky because the local population will have a hard time accepting foreign meddling in their business.

Second, I think it would be wrong to blame entirely NATO for the aftermath. As we can observe throughout the historical record, separatist impulses and even attempts have been present in Tuareg regions. There is no certainty as to how stable and unshaken the status quo would have been in the Sahara desert had Gadaffi not been killed. The fact remains he was a strong supporter of the Tuareg cause. The honesty of his support would have ultimately been tested by the Azawad rebels. With which consequences? There could be two; one is that Gadaffi’s help would have been decisive in stabilizing the Azawad aspirations. Second, his distaste for Islamist movements could have kept the AQIM out of Mali at the expense of a more autonomous north. 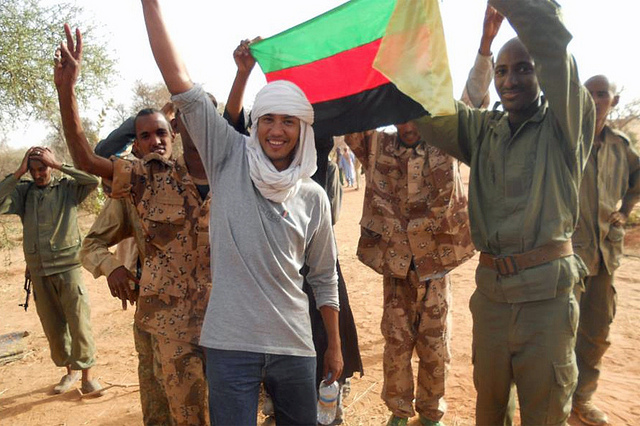 Nevertheless, the alternative still remains that a deeper rupture in the Saharan countries could have appeared if Gadaffi had decided to get totally and directly involved in bringing about the goals of Tuareg self-determination in all the places where they are located. An all-out conflict in Algeria, Mali, Burkina Faso and Niger under the lead of the Colonel would surely attract a stronger Islamist coalition force and NATO ‘boots on the ground’ with thousands of lives lost and another never-ending war between multiple centres of power.

In conclusion, it is difficult to say if NATO’s intervention in Libya was successful or not for the region. Only time will tell. What we can say for sure is that the unintended consequences are costly in human lives, political credibility and prestige, and for African security. It appears to the outside world as if one bad situation turned into a worse one. This lack of improvement is frustrating for any peaceful ideal.

Before we end our journey in the Tuareg land, I would suggest listening to some traditional music here. It is the sound of hope and it might put a smile on our faces despite the dramatic contemporary events surrounding this enigmatic people.