There are several ways to expand your business and diversify what you offer. If you run a service-based business, adding new services to your business is a great way to offer your customers more. It could be a method of offering extra value to your existing customers or it could allow you to reach out to a new audience and attract new customers. Adding a new service to your business isn’t as simple as just listing it on your website. You need to develop the service and prepare to start delivering it before you can launch it. There are several important steps that you need to take.

Decide Which Services to Offer

Budget for Expanding Your Services

Adding a new service to your business can cost money or at least time. You need to work on developing it, you might need new equipment or new staff, and you have to promote it too. Before you start expanding your business with a new service, you should budget the creation and running of your new service. How much is it going to cost to get it up and running? What expenses are involved in providing the service, and how are you going to price it to ensure you make a profit?

A new service often means taking on new staff or perhaps training your existing staff members to give them the required skills. You will need to plan who you will need to hire and what training is required to ensure they will deliver the best service. Some skills might be purely knowledge-based while others might be needed to maintain health and safety or other standards. Perhaps your employees will need advanced rigging training to allow them to work safely and get their best work done. They might need to learn to use new software or maybe study a new product that you will be offering.

Spend some time planning your new service before you launch it. It’s important to get everything in order first.

Prev postNext post
Use your ← → (arrow) keys to browse
Related Topics:business
Up Next

Improving Your Business Should Always Be Something You Are Aiming For

What Is Cryptocurrency And Why Is It So Volatile?

Cryptocurrency has recently made headlines, exploding into the spotlight with the same relentless intensity that characterises its value and demand.

However, as they become more mainstream, they may become confusing. It’s money, but there’s no bank looking after it or controlling it; it’s an asset, but it’s not backed up by anything tangible.

Here is a brief overview of cryptocurrency and a quick look at why it is so volatile.

In a nutshell, it is the digital equivalent of money. It is designed to function in almost the same way: users have wallets in which they can keep money, which is used to symbolize value in the economy and can be exchanged for goods or services with others.

Cryptocurrency, like much money in today’s traditional banking system, does not exist tangibly; instead, it is recorded as figures in a database that signify how much of a particular cryptocurrency a certain person has.

However, in contrast to today’s banking system, is decentralised. Rather, it is recorded in the blockchain, which is distributed throughout the network and records transactions in a transparent and verifiable manner that belongs to no one individual or organization in particular.

The first of them was bitcoin, which was developed in 2009 by an unknown individual known only as Satoshi Nakamoto. Since then, a slew of new cryptocurrencies has sprouted up. These include ethereum and dogecoin. It is interesting to look into the background of these, and ask yourself who created Dogecoin?

Why are there so many?

A cryptocurrency can hypothetically be created by anyone; at their foundation, they are just software, therefore anyone can create one. There is no authoritative body that decides what is and isn’t a cryptocurrency.

As a result, dozens of new cryptocurrencies, known as altcoins, have emerged. Some of them have grown into consistent performers, leading to predictions that they could turn bitcoin on its head and become the most valuable cryptocurrency.

Some of these altcoins aim to provide innovative answers to problems that exist with large players like bitcoin, such as making transactions easier or more efficient. Others, such as Dogecoin, which originated as a joke, are developed solely as alternatives.

They sometimes move in sync, with the entire cryptocurrency market fluctuating in response to certain pieces of news. However, traders occasionally switch between currencies, as when the price of dogecoin soared thanks to the support of figures such as Elon Musk.

What makes cryptocurrency so volatile?

Unlike traditional financial assets like stocks and commodities, cryptocurrencies are not valued in terms of what they can be used for; in theory, they are a bet on a company’s future profits or the usefulness of a given material, but cryptocurrencies are primarily a bet on how interested people are in them.

Cryptocurrencies, unlike traditional fiat currencies, do not have a central bank entrusted with employing monetary policy to keep their value from fluctuating too much.

As a result, the value of cryptocurrencies varies dramatically, frequently and without warning, and without always being linked to evident world events.

Marketing Practices That Could Remain After The Pandemic

The global pandemic has changed businesses in many ways, and marketing, in particular, has seen a lot of developments over the last year. Businesses have had to adapt to digital practices quickly, which has changed the way they promote their activities. It has also changed consumer behavior, meaning tactics need to change to reach them in new and innovative ways.

While businesses are beginning to revert to some sort of normality, there are some practices that will continue even after the pandemic is over. Discover some of the marketing practices that could be here to stay.

The global pandemic has had a huge impact on people’s shopping behaviors. It’s no secret that brand loyalty has been in decline over the years, largely due to consumers’ preference for convenience – especially in the digital age. But the pandemic has made this even more apparent, with many consumers switching brands as a result of supply chain issues and more. For businesses, putting your energy into retaining your existing customers could yield better results than trying to win over existing customers.

The resurgence of the QR code

Just over a year ago, people might have turned their nose up at the idea of using a QR code in a marketing campaign. Did people know what they were? What did they achieve? Well, thanks to the pandemic, QR codes have had something of a resurgence. Exploring QR code APIs can help you work out how they can be used in your marketing campaigns effectively to bring the best results for your business. QR codes are capable of generating some great data, helping you measure the effectiveness of your marketing campaigns.

The pandemic has shifted a lot of people away from busy cities and urban areas, and into more rural neighborhoods. This has meant that businesses are having to change their marketing tactics to provide a more personalized, local feel that better aligns with changing behaviors. People are choosing to shop locally and choose local-based businesses, and you’ll need to think carefully about how you can form better engagement with those audiences to help spread the word about your business.

With people spending more time at home, they are more active online watching box sets, shopping, gaming and more. This means they might be less likely to see more traditional advertising such as billboards and subway signs. Social media advertising can help you reach those audiences, providing a great ROI compared to other forms of advertising. Ensuring social media is a firm part of your marketing strategy can help you reach your audiences where they are, and even save money compared to your spend on more traditional advertising.
Change is nothing new for the marketing world. The pandemic has seen some major developments, and as we enter the ‘new normal,’ it will be interesting to see what comes next. Staying up to date on current marketing trends can keep your business relevant, and help secure the best results for your business – no matter what’s happening in the rest of the world.

Subsale Market an Attractive Prospect for Investors in Malaysia

Investors were responsible for 81.1 per cent of residential property purchases in the Klang Valley area last year.

Many of these investors were putting their money into subsale properties, and according to Joe Jock Thor from MyProperty MD, the market for subsale residential properties has experienced steady growth in the past few years, but it has seen a real upswing in recent months due to the effects of the Covid-19 pandemic, which has put the focus squarely on the secondary real estate market as real estate owners move to maintain their financial liquidity by lowering prices. This means investors are free to swoop in and pick up assets at a fraction of the cost, increasing their potential value once they go back on the market.

Another key factor in the spike is the Real Property Gains Tax exemption, which has prompted some investors to turn their assets into cash and, by doing so, make a healthy profit.

In fact, subsale properties were so popular that listings increased by more than twenty percent between 2019 and 2021, although this will only go a small way to making up for 2020’s economic downturn and the resulting fall of 47.2 percent in the number of residential property sales in the Klang Valley.

If you would like to know more about the subsale market in Malaysia, you can find a lot of good information about subsale real estate, and how to buy it, by checking out this infographic on the Malaysian real estate market: 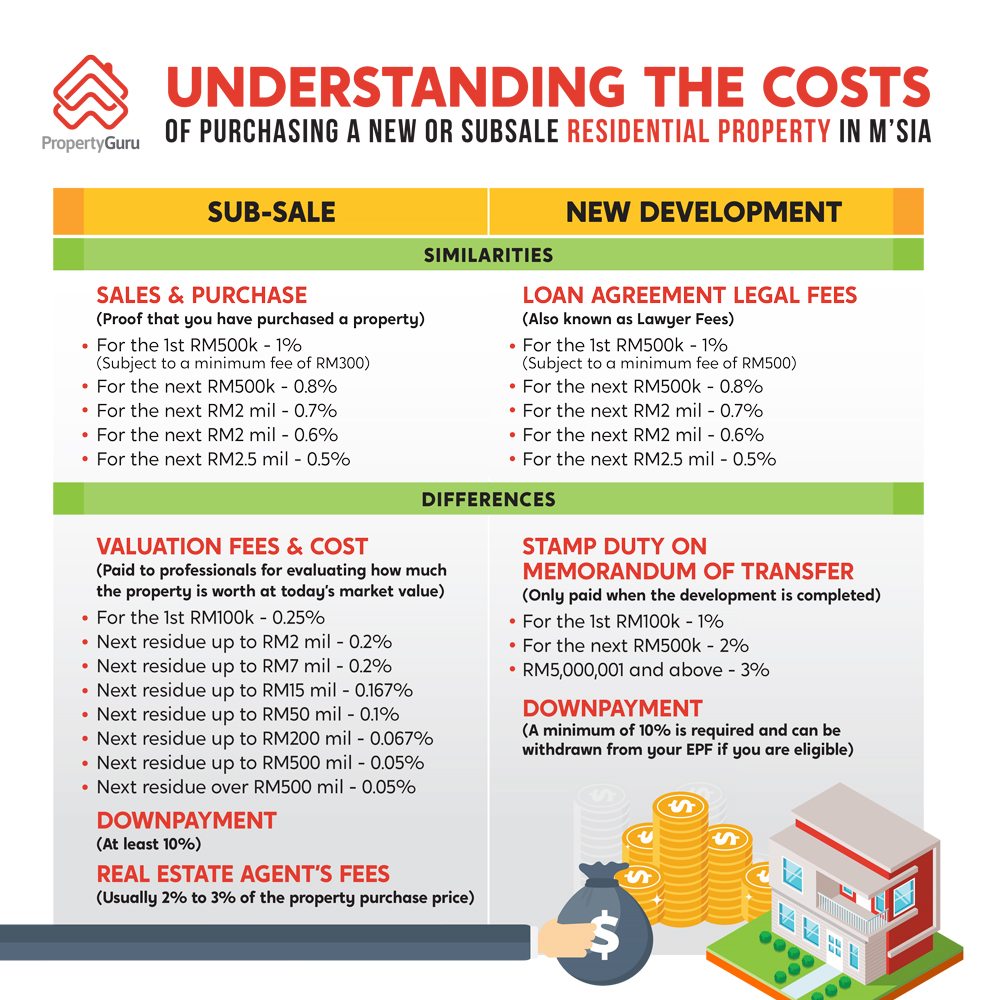 The Key Approaches To Strengthen Your Business’s Data Security

What Is Cryptocurrency And Why Is It So Volatile?

Marketing Practices That Could Remain After The Pandemic

How to Expand the Services Your Business Offers

12 Travel Podcasts To Inspire Your Next Trip

Subsale Market an Attractive Prospect for Investors in Malaysia