With the season of spring just started bringing a big relief from chilly winters, I am sure most of us would be considering planning a vacation somewhere away from home and work. I had the same feeling and this time it got me landed in Greece.

One of the most popular tourist destinations in the world gets even more attractive in Summers. If you are in Europe then you are really missing something if you haven’t had Greece holidays in summers yet.
In a time of economic crisis, the Greek government is trying hard to attract tourism in order to support its dying economy, so if you are thinking this year might not be the right time to come, you could be wrong. Though there are some negative changes as well, due to bad economic conditions (apparently the international train services have been stopped by the government).

As a first time visitor to this country, I made a travel plan after doing some research. I was mostly interested in visiting various Greek Islands and so I divided my trip into two parts. First is from Athens to Eastern and Southern Islands, and second is from Athens to Northern and Western islands.

When I landed in Athens I had a specific image of Greece in my mind. I was expecting the famous whitewashed homes with blue windows and churches with blue domes, but was surprised to see the regional architectural diversity.

The new airport in Athens, Athens Eleftherios Venizelos International Airport, is one of the most attractive airports in Europe that I have seen. The airport was opened in 2001 as part of infrastructure improvements in preparation for the 2004 Olympics games. 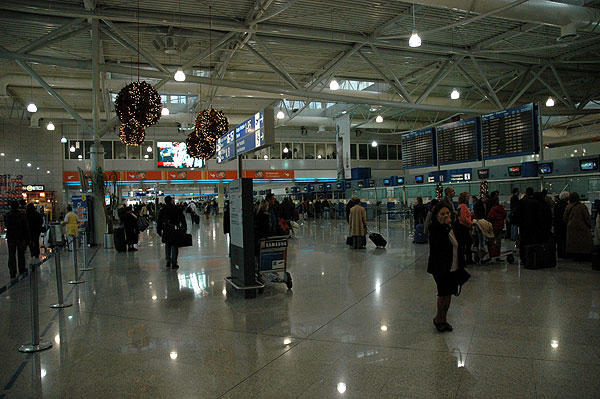 In my opinion, the best way to go to the city from the International Airport (27 KM or 17 miles) is by metro train for €8. Group tickets (2 or 3 people) are also available and they provide some discount. The airport Metro line is an extension of Line 3 (blue line) that takes you to the downtown Syntagma and Monastiráki stations.

It was a great day at Athens, around 20 degree Celsius and sunny, though most pleasant weather occurs in May-June and September-October. It was nice to see that evening tends to get colder, the low levels of atmospheric humidity in most areas of the country preventing the air from trapping a lot of heat, and temperatures tend to dip to very pleasant levels in the evenings.

Being a historical place and capital of Greece, you have lot of things to see and do in the city of Athens, but I had planned to do all that after completing the first part of my trip. After resting and shopping in the local markets of Athens for a day, the next day I planned to go to by ferry from Piraeus, the harbor of Athens, to the Mykonos Islands. There is another port, Rafina, on the west, from where you can reach Mykonos one hour earlier and, due to shorter distance, the ferry prices are also slightly lower. While Rafina is not that popular for travelling to one of the Cyclades Islands, for those who are going there directly after landing at airport, Rafina could be a better choice.

There are two types of ferries, normal and high speed ferries and travel time to Mykonos from Piraeus could range from 3 hour 30 minutes to 5 hours 15 minutes. Economy ferry is my cup of tea and I bought the tickets from the port on the same day. Those who are planning to be there in the month of August should buy tickets in advance, as it is tough to get availability due to festival rush (“Assumption of our lady” Festival).

If you are going from Rafina port, the journey time could range from 2h 10min to 5h 30min, depending on the type of ferry you are taking. On a regular ferry ticket, costs may go upto € 23.50 per person for a seat in economy class; on a highspeed catamaran service expect to pay € 52.50.

Mykonos is one of the most popular tourist destination in Greece. In fact, it is second most preferred tourist destination in Greece (I wonder which is on top? Will let you know as I write more in coming articles on my full trip). Mykonos is the island of youth and fun and it is sometimes also referred to as ‘Ibiza of Greece’. The island is famous for its picturesque towns, all day and night parties and beach sports. Follow this space or Subscribe to TWR Travel via RSS, as I continue my journey to the Greek islands, you should not miss the main attraction of Greece.

I am a passionate traveller and wish to travel all around the world!