Connect with us
A deadly strain of E. Coli bacteria has brought Germany and Eleven other European countries, mainly Germany, Austria, Czech Republic, Denmark, France, Netherlands, Norway, Spain, Sweden, Switzerland, Britain. Germany was the first where a case of infection was registered. The strain has also been found in the United States.

This deadly food borne bacteria produces Shiga toxin which causes haemolytic uremic syndrome (HUS) or kidney failure. So far 17 deaths has been reported due to this infection across Europe.

World Health Organization (WHO) has requested the nations to not to put trade restrictions against these countries as a measure of prevention. However, Russia and Belgium has stopped doing food trade with Spain and Germany, whereas India is respecting WHO’s decisions. 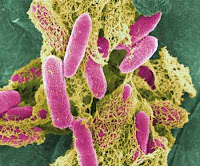 E coli bacteria is a very common bacteria and some strains of it can be found in human intestine which some says are good for digestion. But it can be dangerous as well, in medieval days European women used to feed their child without properly cleaning their hands after using toilet thus passing this bacteria in child’s stomach this was the reason of massive Cholera outbreak.

In most of the urine infection cases E coli bacteria is found the main reason. This infection can be cured with the normal dose of Anti Biotics.

Humans acquire the infection by consuming contaminated food or water. Following an incubation period of about 3-4 days, a variety of gastrointestinal symptoms appear, ranging from mild to severe bloody diarrhoea, mostly without fever. The one causing infection now is a highly virulent mutated strain.

The Food Safety and Standards Authority of India (FSSAI) is taking measure by asking its official to take extra care in checking on all international ports and four airports which receive food imports from these countries. All the food items will be sent to the Authority’s lab for testing before releasing into Indian markets.


Scroll down if you are looking for comment form, your comment is very much appreciated!!
Visit The World Reporter for discussion on this post. Or you may like to know what others are saying on this topic.
Related Topics:
Up Next

US Tracked Osama Through Interrogation of Prisoners in Romania, Poland

Holiday in Italy: choose Florence for a break in the winter

Florence is one of the most visited Italian cities, with over 15,4 million tourists visiting the city each year. Located in the heart of the Tuscany region, this beautiful city breathes history, life and culture among its streets. If you are looking for the perfect location for your next winter holidays, then you should look no further, Florence is the perfect destination for you.

Florence is one of the cities with the richer gastronomy in the world. From traditional Italian cuisine to exquisite wines, the food in this city have everything you may wish for in order to please your palate.  With so many options available, you may be wondering where to eat in Florence. Food critics recommend that you check out the following options during your visit to Florence:

Florence is a city with a lot of monuments and museums to discover. However, most people that visit the city tend to focus only on the main monuments of the city, such as Campanile di Giotto or Palazzo Vecchio o della Signoria, and the restaurants near those. Because of that, if you want to experience Florence to its fullest, we recommend you rent a bike.

Discovering Florence by bike will grant you access to places away from the mainstream crowds,  such as the Andrea del Sarto Museum (dedicated to this amazing Italian painter) or the beautiful Ospedale degli Innocenti (a 17th-century home for abandoned children which includes some amazing pieces of art done by renowned artists like Botticelli). These are really stunning places you would miss if you stick to the traditional tourist route, causing you a lot of regrets over the missed chance.

Greece is a fantastic destination for many people, and for a number of different reasons. It you are keen to see some of the islands and soak up the sun, then you are in for a truly luxurious and paradisiacal time indeed. Similarly, if you just want to spend some time in Athens and see the major sights, then you will come away feeling refreshed and full of vigour from the sheer history and culture that surrounds you. But Greece is also a great place to consider if you are keen to work and travel at the same time. There are plenty of opportunities which you can grab there, and it is a perfect setting if you are a freelancer looking to work on the go. Let’s take a look at some of the things you might want to consider when you are thinking about working and travelling in Greece.

Even if you plan to somewhat move around at leisure, you will probably still find it useful to have some kind of itinerary to work on. That will mean that that whole side of things has been taken care of, which won’t therefore be too much of a worry or a stress when you are trying to make the most of the time you have there. You can then work away, if you are freelancing, while also moving around as you have determined. You can always move away from this, and it is a good idea to have a kind of loose itinerary, but as long as you have one that is the main thing that matters. It will make working and travelling in Greece much easier and more likely to succeed.

Because of the nature of working on the go, you will need to make sure that you have fully understood everything you need to do in order to keep your lifestyle working smoothly. That largely means looking into the more technical aspects of working on the go, which is something that you might find is easier than you would think. As long as you make a point of finding out how to sync contacts from iPhone to Mac so you can better keep in touch with people, and as long as you know what software you need to have to do your work, you should be able to travel the world and work as you please, so that is something to consider.

You will probably find that Greek culture suits working very well, and it might be something that you want to think about in order to make sure that it is really the right place for you. It all depends on the nature of the work. For writers and other creatives, it could be the perfect backdrop, and you might feel that you simply never want to leave. However it is that you approach it, you can be sure that you are going to have a great time like this.

Rent a Scooter in Tenerife expands your chances of enjoying this island to the fullest. You can reach all its corners as quickly and comfortably as possible. Do you dare to try tourism on two wheels?

Why rent a scooter in Tenerife?

The pleasure of riding a motorcycle

I can assure you that whoever tries the option of renting a scooter in Tenerife to spend their vacations, always repeats … and that, beyond its functional advantages, this means of transport is a way of life in itself, capable of make your journey much more fun. Time will fly by!

The small size of the motorcycles allows them to get into even the most remote routes, making possible to know each and every one of the best places in Tenerife (such as the Teide National Park, San Cristóbal de La Laguna, El Médano beach, the Port of the cross…).

A means of transport without troubles

Since Tenerife is an island, it turns out very complicated and expensive to transfer your own car or motorcycle there. Car and moto rental is revealed as the smartest way to travel through the Canary Islands, as it allows you to win in freedom of movement.

It is better to rent a scooter in Tenerife than a car, since these types of vehicles makes possible you a more economical, ecological and simple driving. Imagine the traffic jams and parking problems that you will save on board your motorcycle!

Rent a scooter in Tenerife optimizes your time

The holidays are short-lived, so any alternative that allows us to make the most of our stays abroad is welcome. Going by motorbike around the island makes it possible for you to take more advantage every day of your stay, as it allows you to get right where you want, without wasting time waiting for public transport.

Rent a scooter in Tenerife with Atlantic Moto: sure success

When you decide to rent a scooter in Tenerife to spend your holidays it is very important to go to a reliable company that, like veteran Atlantic Moto, takes care of even the smallest detail so that you only have to worry about enjoying your stay.

Preparing To Start A New Business: Things To Think About

Why Do Movies Change The Way People Dress?

Weed It And Reap! It’s Time To Design Your Own Garden

The Smartest Ways to Develop Your Business

The best ways to stay entertained at home

The 10 highest-grossing films of all time

The best films released in 2020 you can’t miss

Top science fiction films of the past decade

What Is CBD Oil Good For?