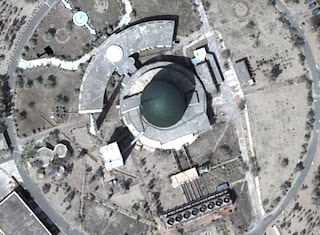 A new US Congressional report has challenged the Pakistani story that India’s first nuclear test in 1974 was the trigger for its nuclear weapons quest. The Congressional Research Service’s May 15 report to US lawmaker said that Pakistan’s nuclear energy program dates back to the 1950s “but it was the loss of East Pakistan (now Bangladesh) in a bloody war with India that probably triggered a political decision in January 1972 (just one month later) to begin a secret nuclear weapons program.” It further added that Pakistan’s argument was falsely represented to the international community, that it was forced to take the nuclear weapons path because it was provoked by India’s first nuclear test in 1974.

One such expert, White House insider Bruce Riedel, who recently co-authored the Obama administration’s Af-Pak policy, offered the following sequence in a recent op-ed, broadly concurring with the CRS report:

“The origins of the Pakistani nuclear program lies in the deep national humiliation of the 1971 war with India that led to the partition of the country, the independence of Bangladesh and the destruction of the dream of a single Muslim state for all of south Asia’s Muslim population.” The military dictator at the time, Yahya Khan, presided over the loss of half the nation, the surrender of 90,000 Pakistani soldiers in Dacca. The Pakistani establishment determined it must develop a nuclear weapon to counter India’s conventional superiority.

The new prime minister of those times, Zulfikar Ali Bhutto, secretly convened the country’s top 50 scientists in January 1972 and challenged them to build a bomb. He famously said that Pakistanis would sacrifice everything and “eat grass” to get a nuclear deterrent. The 1974 Indian nuclear test helped Pakistan to tell the world that this is the cause of their nuclear bomb. Starting in 1972, Pakistan came up with its own nuclear bomb in 1998 with the slight help of China, just a few days after India’s second nuclear test

The Report further added, “Mr. Bhutto received an unsolicited letter from a Pakistani scientist who had studied in Louvain, Belgium, Abdul Qadeer Khan, offering to help by illegally acquiring sensitive centrifuge technology from his new employers at a nuclear facility in the Netherlands. Over the next few years—with the assistance of the Pakistani intelligence service, the Inter Services Intelligence Directorate (ISI)—Mr. Khan would acquire the key technology to help Pakistan produce fissionable material to make a bomb.”

Both the CRS report and Riedel pointed out to the help which China gave to Pakistan in its nuclear weapons quest, a subject successive US administrations are leery of broaching for fear of angering Beijing. “Islamabad gained technology from many illegal sources,” says the CRS report, adding, “This extensive assistance is reported to have included, among other things, uranium enrichment technology from Europe (stolen by Khan, according to Riedel), blueprints for a small nuclear weapon from China, and missile technology from China and North Korea.”

Riedel concurs, writing, “China also helped the nascent Pakistani program overcome technical challenges.” According to some accounts by proliferation experts, it allowed Pakistani scientists to participate in Chinese tests to help them learn more about the bomb.

Pakistan not only acquired the bomb and technology but some unconfirmed sources reports Pakistan to help other countries like Iran, Libya and North Korea to make a nuclear bomb, even though this transfer of technology is considered highly illegal. “An angry, humiliated, and wounded A.Q.Khan (father of Pakistan Nuclear Bomb) has finally made public what has long been suspected: his nuclear proliferation activities that included exchanging and passing blue-prints, technology and equipment to China, Iran, North Korea, and Libya was done at the behest of the Pakistani government and military, and he was forced to take the rap for it.” (Source: AQ Khan nails Pakistan’s nuke lies: Times Group)

After acquiring the bomb, Pakistan gave main attention to its conventional power building. At a press conference held during an international exhibition of defense equipment in Turkey last summer, a Russian military delegation harshly criticized the Pakistan Ordnance Factories Company for copying Russian weapons systems. The Russians claimed that the POF’s RPG-7P anti-tank rockets, 122-mm D-30 howitzer ammunition and PK-10 assault guns were 100-percent imitations of Russian systems. The PK-10 assault gun is a Pakistani version of the Russian Kalashnikov, or AK-47, the Russians pointed out. As for the other two weapons, even the names remain the same. (Source: Russia confronts Pakistan, China over copied weapons)

The Brookings said in one of its article, Pakistan and the Bomb: Pakistan is a unique nuclear weapons state. It has been both the recipient of technology transfers from other states and a supplier of technology to still other states. It has been a state sponsor of proliferation and has tolerated private sector proliferation as well. Pakistan has engaged in highly provocative behavior against India, even initiating a limited war, and sponsored terrorist groups that have engaged in mass casualty terrorism inside India’s cities, most recently last November in Mumbai. No other nuclear weapons state has done all of these provocative actions.

Visit The World Reporter for discussion on this post. Or you may like to know what others are saying on this topic.
Prev postNext post
Use your ← → (arrow) keys to browse
Related Topics:

My family was paid to attack India: Kasab