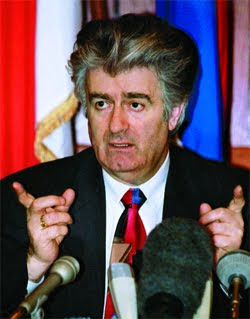 A news agency has reported that around 160 survivors of Bosnia’s 1992-95 war are leaving Sarajevo to attend the genocide trial of their wartime leader, Radovan Karadzic, in Hague, Netherlands. Monday will be the starting day for Karadzic’s trial before the International Criminal Tribunal for the former Yugoslavia.
However, he has boycotted the trial, as he was not given proper time for it, according to him. He has been in custody and working on his defense since his arrest on a Belgrade bus, in July 2008. Judges have now scheduled his trial on Tuesday.
The decision enraged survivors, who had traveled by bus from Bosnia to see Karadzic finally face justice. A small group briefly refused to leave the courtroom after the adjournment and one woman threatened a hunger strike.
“We are going there (Hague) to show to Europe and the world that we are still here, still searching for the truth and still waiting for justice,” Munira Subasic, head of an association gathering the 1995 Srebrenica massacre survivors (who organised the trip), told FENA before his trial on Monday, which was postponed.
Sarajevo (AFP) quoted Subasic, who is still searching for the remains of her son and husband as
“Karadzic’s trial should be conducted in line with rules and justice to avoid what had happened with (former Serbian president Slobodan) Milosevic”. Milosevic died in his prison cell during his genocide trial in 2006.
“When he died, justice died as well,” Subasic further added.
Karadzic faces life imprisonment on 11 counts of genocide, war crimes and crimes against humanity for his actions as Bosnian Serb president during Bosnia’s inter-ethnic war, that claimed an estimated 100,000 lives. Karadzic is also charged notably for the July 1995 massacre of around 8,000 Muslim men and boys at Srebrenica.

Romania can act as a gateway between Russia and EU

Holiday in Italy: choose Florence for a break in the winter

Florence is one of the most visited Italian cities, with over 15,4 million tourists visiting the city each year. Located in the heart of the Tuscany region, this beautiful city breathes history, life and culture among its streets. If you are looking for the perfect location for your next winter holidays, then you should look no further, Florence is the perfect destination for you.

Florence is one of the cities with the richer gastronomy in the world. From traditional Italian cuisine to exquisite wines, the food in this city have everything you may wish for in order to please your palate.  With so many options available, you may be wondering where to eat in Florence. Food critics recommend that you check out the following options during your visit to Florence:

Florence is a city with a lot of monuments and museums to discover. However, most people that visit the city tend to focus only on the main monuments of the city, such as Campanile di Giotto or Palazzo Vecchio o della Signoria, and the restaurants near those. Because of that, if you want to experience Florence to its fullest, we recommend you rent a bike.

Discovering Florence by bike will grant you access to places away from the mainstream crowds,  such as the Andrea del Sarto Museum (dedicated to this amazing Italian painter) or the beautiful Ospedale degli Innocenti (a 17th-century home for abandoned children which includes some amazing pieces of art done by renowned artists like Botticelli). These are really stunning places you would miss if you stick to the traditional tourist route, causing you a lot of regrets over the missed chance.

Greece is a fantastic destination for many people, and for a number of different reasons. It you are keen to see some of the islands and soak up the sun, then you are in for a truly luxurious and paradisiacal time indeed. Similarly, if you just want to spend some time in Athens and see the major sights, then you will come away feeling refreshed and full of vigour from the sheer history and culture that surrounds you. But Greece is also a great place to consider if you are keen to work and travel at the same time. There are plenty of opportunities which you can grab there, and it is a perfect setting if you are a freelancer looking to work on the go. Let’s take a look at some of the things you might want to consider when you are thinking about working and travelling in Greece.

Even if you plan to somewhat move around at leisure, you will probably still find it useful to have some kind of itinerary to work on. That will mean that that whole side of things has been taken care of, which won’t therefore be too much of a worry or a stress when you are trying to make the most of the time you have there. You can then work away, if you are freelancing, while also moving around as you have determined. You can always move away from this, and it is a good idea to have a kind of loose itinerary, but as long as you have one that is the main thing that matters. It will make working and travelling in Greece much easier and more likely to succeed.

Because of the nature of working on the go, you will need to make sure that you have fully understood everything you need to do in order to keep your lifestyle working smoothly. That largely means looking into the more technical aspects of working on the go, which is something that you might find is easier than you would think. As long as you make a point of finding out how to sync contacts from iPhone to Mac so you can better keep in touch with people, and as long as you know what software you need to have to do your work, you should be able to travel the world and work as you please, so that is something to consider.

You will probably find that Greek culture suits working very well, and it might be something that you want to think about in order to make sure that it is really the right place for you. It all depends on the nature of the work. For writers and other creatives, it could be the perfect backdrop, and you might feel that you simply never want to leave. However it is that you approach it, you can be sure that you are going to have a great time like this.

Rent a Scooter in Tenerife expands your chances of enjoying this island to the fullest. You can reach all its corners as quickly and comfortably as possible. Do you dare to try tourism on two wheels?

Why rent a scooter in Tenerife?

The pleasure of riding a motorcycle

I can assure you that whoever tries the option of renting a scooter in Tenerife to spend their vacations, always repeats … and that, beyond its functional advantages, this means of transport is a way of life in itself, capable of make your journey much more fun. Time will fly by!

The small size of the motorcycles allows them to get into even the most remote routes, making possible to know each and every one of the best places in Tenerife (such as the Teide National Park, San Cristóbal de La Laguna, El Médano beach, the Port of the cross…).

A means of transport without troubles

Since Tenerife is an island, it turns out very complicated and expensive to transfer your own car or motorcycle there. Car and moto rental is revealed as the smartest way to travel through the Canary Islands, as it allows you to win in freedom of movement.

It is better to rent a scooter in Tenerife than a car, since these types of vehicles makes possible you a more economical, ecological and simple driving. Imagine the traffic jams and parking problems that you will save on board your motorcycle!

Rent a scooter in Tenerife optimizes your time

The holidays are short-lived, so any alternative that allows us to make the most of our stays abroad is welcome. Going by motorbike around the island makes it possible for you to take more advantage every day of your stay, as it allows you to get right where you want, without wasting time waiting for public transport.

Rent a scooter in Tenerife with Atlantic Moto: sure success

When you decide to rent a scooter in Tenerife to spend your holidays it is very important to go to a reliable company that, like veteran Atlantic Moto, takes care of even the smallest detail so that you only have to worry about enjoying your stay.

Feeling the Pressure of Prescriptions? Read this Now!

3 Tips For An Easy House Move

3 Issues Repair Workers Are Facing During The Corona Pandemic

Why A Great Website Is Always A Business’ Top Priority

Business Essentials to Cross off Your Checklist This Year

Here’s Why Everyone Can Get Stacked At Home During Lockdown

Feeling the Pressure of Prescriptions? Read this Now!