Corruption is a big bane for the society at large as it hinders development and restricts growth. Despite serious efforts being initiated by governments across the world to check this menace, corruption continues unabated.

Below are listed top 8 corrupt countries of the world that add to this menace of corruption. 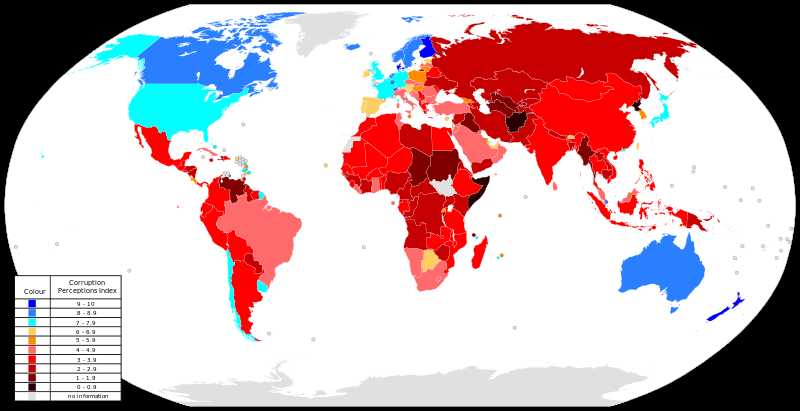 Lack of a stable government, unaccounted corruption by those in power and continued violence has ensured that Somalia tops the list of corrupted nations in the world. The roots of corruption in Somalia are old and date back to times when the country was used as a battleground by US and USSR. The Siad Barre regime took undue advantage of the funding being done by US and took corruption to a new level.

An unlikely entrant in the list, North Korea figures second in the rank of most corrupted nations in the world. Railway security agents seem to be making most of the unaccounted money as people are willing to pay large sums to enter the country illegally. Worse enough, those wanting to escape from the tentacles of the communist regime in the country too have to pay large bribes to get out safely from North Korea. The nation thus ranks at number 2 on the corruption index.

The rich natural resources of Myanmar are turning into its worse curse too. The wit of drug peddlers seems to be running high across the nation as they make most of the occasion. The ethnic violence that has continued in Myanmar since long too has given ample opportunity to those who consider corruption as a business.

Bribery seems to be the biggest curse of Afghanistan. The country is plagued by this menace and as per an estimate people paid about 2.5 billion dollars in bribe in 2010 alone. The results of a survey finding are more disturbing too. About 38 percent of the population in Afghanistan consider corruption to be a normal process and do not consider paying bribe as a crime. Reason enough to believe that people pay billions of dollars as bribe every year, thus taking corrupt practices in the country to a new high.

A country rich in resources, Uzbekistan is plagued by a peculiar problem that encourages corruption. The government has all the control over the resources in the country and does not allow any private or independent investment.

This encourages corruption as government authorities realize that none in the establishment will question their decisions. Infact, the business community in Uzbekistan is a disheartened lot and fears investing in any form, even if some opportunities exist at some levels.

Turkmenistan gained independence from USSR in 1991 and has a distinct Soviet influence. People had to face intense human violation during the turbulent times. This continuing cycle of violence encouraged corruption in this nation. This practice continues till date and the problem gets compounded by the fact that the nation has little freedom of press. Turkmenistan is also the 10 th most censored country in the world and those indulging in corrupt practices take advantage of this fact too, pushing corruption to a high level and making Turkmenistan the 6th most corrupt nation in the world.

Another nation plagued by corruption, Sudan gets million of dollars in aid every year. However, corruption also sets in as the aid hardly reaches those in need. The fund lands in hands of few corrupt government officials who instead divert the money into their private foreign banks. The practice has been continuing unabated since 2005 when Sudan gained self rule. This continuous inflow of money in form of aid and its dispersal in wrong hands has ensured that Sudan ranks at number 7 in the list of corrupt nations in the world.

Despite the end of the autocratic Saddam Hussein regime, Iraq continues to be the world’s 8th most corrupt nation in the world. The problem gets compounded from the fact that anyone raising their voice against the government in Iraq is quickly prosecuted and in all the likely circumstances handed the death sentence. Those indulging in corrupt practices within the government take undue advantage of this fact and continue to make huge sums of money. This practice still continues in Iraq despite the end of Saddam Hussein regime, thus making Iraq the eighth most corrupt country in the world.

Dedicated efforts need to be initiated to tame in the menace of corruption. However, lackluster response from authorities in these countries has ensured that these nations continue to occupy the top 8 slots in the category of corrupt nations.

About The Author: Margaret is a blogger by profession. She loves writing, reading and traveling. Beside this she is fond of luxury cars and wishes to own one day RUF CTR-3.

Race to Antarctica, Which Country Owns This Continent?