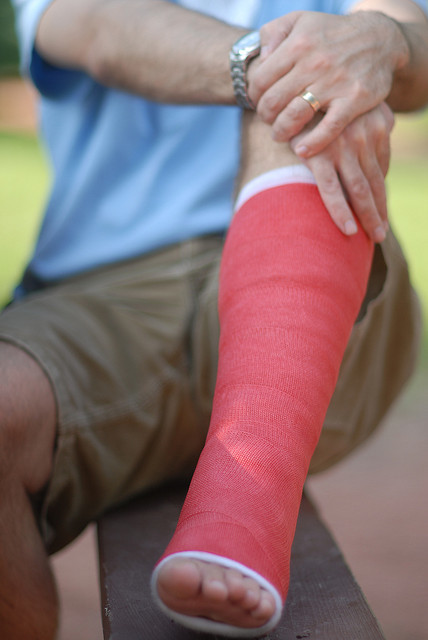 You may not know anyone who has had a workplace accident, but that doesn’t mean that they don’t happen. In fact, workplace accidents are much more common than you would think. At least 25 percent of injury claims are caused by workplace injuries.

When you are injured at work through no fault of your own, it can be hard to know what to do next. Many people who have been seriously injured in a workplace accident are left feeling confused and anxious.

Victims of workplace accidents tend to worry about whether they will fully recover from their injury.

Many people who haven’t been in a workplace accident wonder how they occur, and what the most common accidents are.

The most common accidents that occur are as follows: overexertion, fall on a same level surface, and fall to a lower level. While there are also other workplace injuries that occur, these tend to be the most common.

Once a worker has been injured at work, the priority should always be getting them the help they need. The type of treatment a worker requires will depend on the seriousness of the accident. Some workplace injuries need hospital treatment while others only need the care of an on-site first aider.

For instance, a fractured or broken bone, a deep wound, a bang to the head, are all things that could lead to a compensation payout. Not every victim of workplace injury wants to get compensation. However, when the injury has affected their ability to work, it can sometimes be necessary.

If a victim decides to go through the courts, to get compensation, the first step is hiring an accident attorney. While in some courts victims can represent their own case, if they want a fair settlement, having an attorney present is a must.

The process of going through the courts, to get compensation isn’t an easy one, it’s a long and tiring process. Most victims of workplace accidents never make it to court, instead settling out of court for a financial deal.

However, when victims do make it to court, as long as they have evidence to back up their claim, they are often successful. With evidence, witnesses and a good lawyer, most workplace injury victims receive a good settlement.

However, the stress that comes with having to go to court, make statements and be cross-examined can sometimes be too much. That’s why many victims choose to settle out of court.

The Most Common Injury Claims, According To Lawyers

10 Tips for Starting Your Own Architectural Firm

You’ll need to identify the type of architecture you want to specialize in before getting started. This could be anything from residential homes, commercial buildings, public spaces, or any other niche within the architectural field.

As an architect, your network can make or break your business. Make sure to establish relationships with clients and potential partners as soon as you can. Joining local networking groups and attending events can help you build valuable connections.

If you don’t have enough capital to get started, consider applying for grants or loans from government agencies or investors. Having some capital behind you will give you more freedom to pursue projects that align with your goals and vision for your firm.

A successful business requires a plan. Your plan should include your vision for the firm, as well as strategies for marketing and managing finances. Having a clear roadmap to follow will make it easier to stay on track and reach your goals.

It’s important to protect yourself legally when starting an architectural firm. Make sure you understand all of the relevant laws in your area, including licensing requirements and zoning regulations. You’ll also need liability insurance in case something goes wrong with one of your projects.

In order to keep up with the competition, you’ll need to invest in modern technology and tools. This could include anything from computer-aided design (CAD) software to a paper folding machine. Investing in the right technology can help you streamline processes, save time, and create a better final product.

Marketing is key to the success of any business. Make sure you have a good plan in place for reaching out to potential clients and increasing your visibility. Social media, content marketing, and search engine optimization (SEO) can all be helpful in this regard.

If you want your firm to stand out from the competition, you’ll need to hire talented employees. Look for individuals with experience in the architectural field who share your vision and passion for design.

Creating a unique brand identity is essential if you want your firm to stand out from the crowd. This could involve creating a logo, website, or slogan that captures the essence of what your firm stands for.

The architecture industry is constantly changing and evolving, so it’s important to stay flexible and adapt to new trends. Don’t be afraid to try something different or take risks when necessary. Doing so can lead to greater success in the long run.

Starting your own architectural firm can be a rewarding experience, but it requires planning and dedication. Make sure to follow these tips when getting started to ensure that you set yourself up for success!

6 Affordable Ways to Take Care of Your Dental Health

While many patients are looking towards dental tourism to get their dental health back in check, the good news is that you don’t need to. While yes, sometimes dental health care can, at times, be fairly pricey, there are things you can do to make sure that it’s affordable. So, here are some tips for keeping your dentist visits easy and affordable.

Getting rid of bacteria in your mouth can be as easy as brushing twice a day. But it’s important to follow the proper technique for doing so. If you need more clarification, you can ask your dentist for advice. Bacteria in the mouth cause cavities, gum disease, and other dental problems. Getting rid of the plaque in your teeth is important to keep them healthy.

Flossing before brushing is one of the best things you can do for your oral health. Performing this dental hygiene routine can prevent gum disease and tooth decay. While you’re flossing before brushing, you’ll also remove food particles that are stuck in between your teeth. It’s also easier than brushing. In fact, flossing first can even increase the concentration of fluoride in your mouth. Fluoride strengthens your teeth’s enamel, which can help prevent cavities.

Having cash set aside for dental emergencies

While no one likes to think about dental emergencies, it’s so important that you do. Having cash set aside for dental emergencies is a smart way to ensure that your teeth stay healthy. A dollar spent on cleanings and X-rays can save you a lot of money on more expensive procedures down the road. Getting treated for an emergency is never convenient, and trying to figure out how to pay for it can be stressful. So, make sure you have some type of emergency fund for something like this.

While it’s fine to eat sweets in moderation, it’s best to try to avoid this unless it’s a special occasion. You’ve probably heard it enough times, but sugar can cause cavities. Ideally, you stick to drinking water and limit your sugar and salt intake.

Whether you’re wearing a teeth retainer or not, you’re going to need to have some type of oral care routine each night at home. Taking care of your dental health at home is a great way to avoid expensive trips to the dentist. You can save money in the long run, and you can prevent major issues that can cost hundreds of dollars to repair. The two most important things you’ll need to do is brush and floss. This keeps your gums and teeth healthy and free from cavities and gum disease.

It’s also important to visit your dentist twice a year. Your dental hygienist will check your mouth for signs of oral cancer, gum disease, tooth decay, and other problems. They will examine your teeth and take x-rays of your mouth. This will help them determine if you need more in-depth treatment. Your dentist can also recommend a home oral care regimen tailored to your unique needs.

This includes the use of mouthwash, which can help remove plaque and freshen your breath. By all means, you should always take advantage of this. How can this be affordable? Well, by going to the dentist twice a year, they’ll be able to fix and prevent any potential issues before they even begin.

How to Look After Your Health Despite Your Disability

The Importance of Staying Healthy Despite Your Disability

Tips for Staying Healthy Despite Your Disability

Eating a healthy diet is important for everyone, but it’s especially important if you have a disability. A healthy diet can help you manage your weight, get the nutrients you need, and maintain your energy levels. There are lots of things you can do when you’re planning your meals:

Choose foods that have less fat and sugar. Fatty and sugary foods can contribute to weight gain, which can put a strain on your joints and muscles.

Include lots of fruits and vegetables in your daily diet. Fruits and vegetables are packed with essential vitamins and minerals, and they can help you stay hydrated.
Make sure you’re getting enough protein. Protein is necessary for tissue repair and growth, so it’s important to include it in your diet if you have a disability.

Exercise is important for everyone, but it’s especially important if you have a disability. Regular exercise can help improve your flexibility, muscle strength, and overall mobility. It can also help reduce pain levels, improve mental health, and boost your energy levels. If you’re not sure where to start with exercise, talk to your doctor or physical therapist about an appropriate workout plan for you. There are also many adaptive fitness programs available that cater to people with disabilities.

Seeing Your Doctor and Dentist Regularly

It’s important to see your doctor and dentist regularly regardless of whether or not you have a disability, but it’s especially important if you have a disability. This is because people with disabilities often have additional health concerns that need to be monitored closely. Make sure to keep up with all of your appointments and follow any treatment plans that your doctors recommend. Looking after your teeth is key so you can keep issues like tooth decay and infections at bay.

Stress can take a toll on your physical and mental health, so it’s important to find ways to manage it. If you have a disability, you may find that you’re more susceptible to stress due to your limited mobility or chronic pain. There are lots of things you can do to help manage your stress levels:

Identify your triggers. What are the things that tend to trigger your stress? Once you know what they are, you can start to avoid or remove them from your life.

Talk to someone. Sometimes talking to a friend, family member, therapist, or other support systems can help relieve stress.